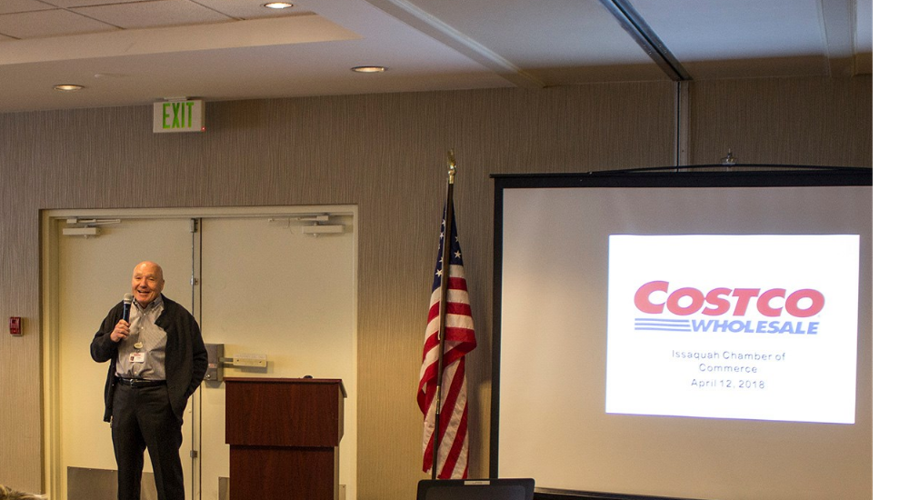 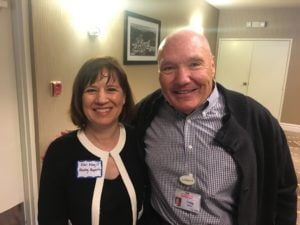 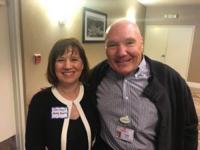 One of the perks of having a global retail giant headquartered on the Eastside is that occasionally you get some face time with the company’s CEO. Case in point: Costco CEO W. Craig Jelinek, who was the keynote speaker during the Issaquah Chamber of Commerce’s April 12 luncheon.

During a one-hour presentation, Jelinek — who started his retail career stocking shelves at Fed-Mart some 40 years ago — was unimposing and loquacious as he clicked through a slideshow of company information, offering up data both austerely fiscal (last year, the company recorded $126 billion in sales, making it the second-largest global retailer behind Walmart’s approximately $485 billion) and curiously piquant (on average each year, Costco sells 135 million hot dogs and 87 million rotisserie chickens; fills 43 million prescriptions in its pharmacies; and sells nearly 3 million pumpkin pies during the shortened week leading up to Thanksgiving).

Jelinek joined Costco in 1984 (nine years before the company merged with Price Club) and worked his way up through management positions as the company expanded. He was named Costco’s president and COO in 2010, and was appointed president, CEO, and director when co-founder Jim Sinegal retired on Jan. 1, 2012.

Jelinek offered candid insights and observations on Costco’s past, present, and future. Here are some quoted excerpts from his presentation.

On wall street vs. main street

“We have never been a company that puts the shareholders on top. You have a responsibility to a shareholder — you do — but if you take the shareholder first, you are going to be in it for the short-term. We had a difficult time (with Wall Street) with the wages that we paid (and) our refund policy, but we’ve gotten past that because have been able to grow the business.

“Everything that we do at Costco is not to figure out how much we can make; it’s (about) how little we can make and still pay our bills because we want to sell more. We want to continue to lower the price and sell more units. It gets us more gross margin dollars to pay the bills.”

On the importance of membership growth and renewals

“Obviously, if you are someone like me, that’s your biggest fear — you start losing memberships, you start losing traffic, and nothing good can happen. We are very paranoid about making sure we always do what’s best for our members. Last year, we made about $3 billion pre-tax in membership fees. That’s how important that fee is to us.”

“One of the thought processes we had (when opening Costco.com in 1999) was, you know, we didn’t think it would ever become a big business, but we thought, ‘We’ve got to get into this business. There is this company called Amazon and we’ve got to keep them honest.’ Well, guess what. Amazon speaks for itself. But we are doing very well in the dot-com business . . . If I had to do it over again we would have probably been faster in the dot-com business. That was, in my view, a mistake.

“Obviously, people like things delivered, which is very expensive to do. We launched our own same-day delivery with a company called Instacart. It’s growing very well for us. The thing we don’t like about delivery is that the average transaction is about 60 percent less. This doesn’t quite work the same because the impulse buying is not there.”

On the business lesson of a $1.50 hot dog and soda

“I came to (Jim Sinegal) once and I said, ‘Jim, we can’t sell this hot dog for a buck fifty. We are losing our rear ends.’ And he said, ‘If you raise the effing hot dog, I will kill you. Figure it out.’ That’s all I really needed. By the way, if you raised (the price) to $1.75, it would not be that big of a deal. People would still buy (it). But it’s the mindset that when you think of Costco, you think of the $1.50 hot dog (and soda).

“What we figured out we could do is build our own hot dog-manufacturing plant (in Los Angeles) and make our own Kirkland Signature hot dogs. Now we are doing so much hot dog business that we’ve opened up another plant in Chicago.

“By having the discipline to say, ‘You are not going to be able to raise your price. You have to figure it out,’ we took it over and started manufacturing our hot dogs. We keep it at $1.50 and make enough money to get a fair return.”