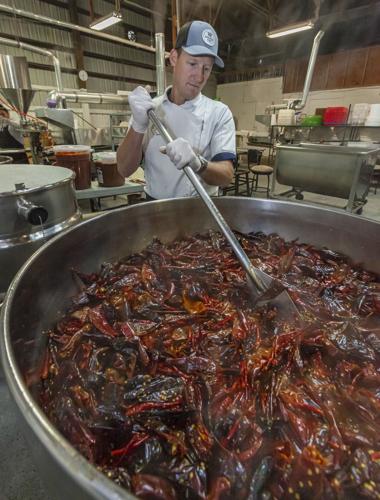 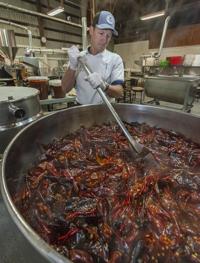 Chef Dave Holthus stirs a vat of puya chili peppers as he prepares them for a batch of Dos Haches Chili Sauce. 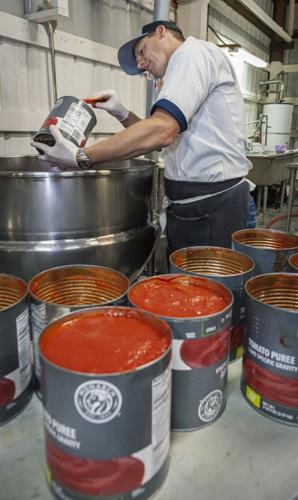 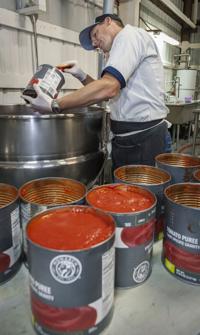 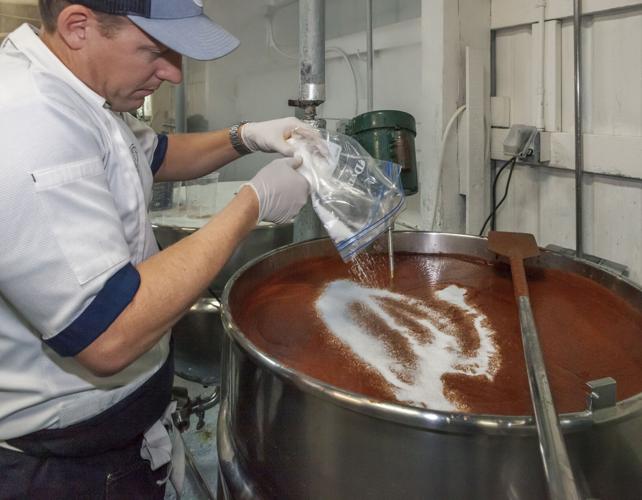 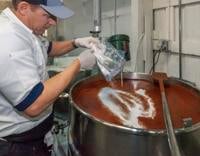 Dave Holthus adds salt to the cooked sauce before tasting. 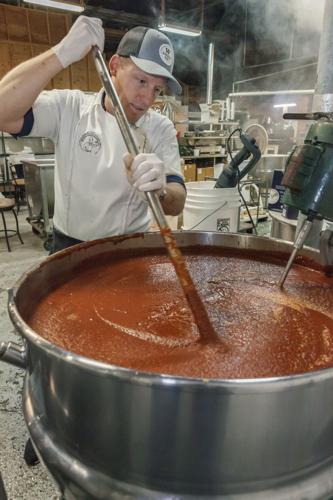 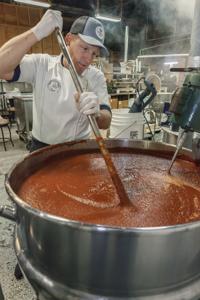 Dave Holthus stirs a batch of Dos Haches Chili Sauce as he prepares it for bottling. 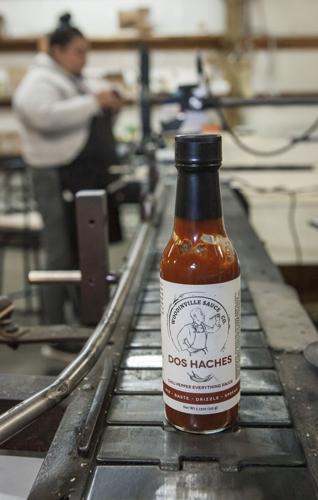 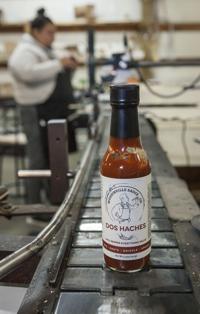 A freshly labeled Dos Haches bottle moves down the assembly line. Next stop: stores and customers. 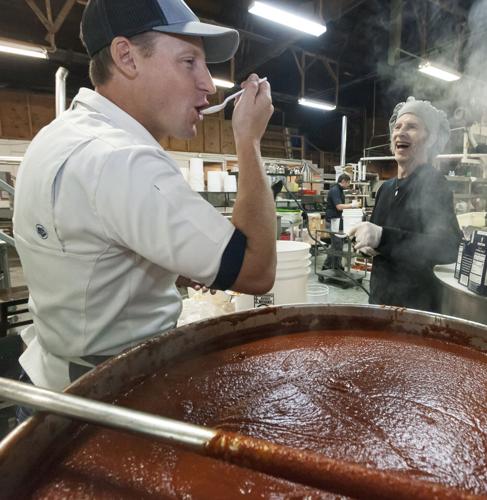 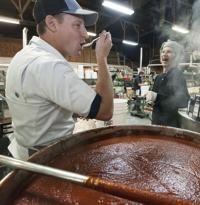 Dave Holthus tastes a batch of Dos Haches Chili Sauce before it’s bottled to ensure the flavor is just right, while striking a pose similar to the character drawn on his bottles’ labels, which gets a laugh from Wolf Pack International Inc. employee and chef Rick Paag. Holthus calls Dos Haches his “signature sauce perfected over months of testing.” His other signature sauces are Blackberry Grill Sauce and Asian Q , which also are made at Wolf Pack, but this day was devoted to Dos Haches. 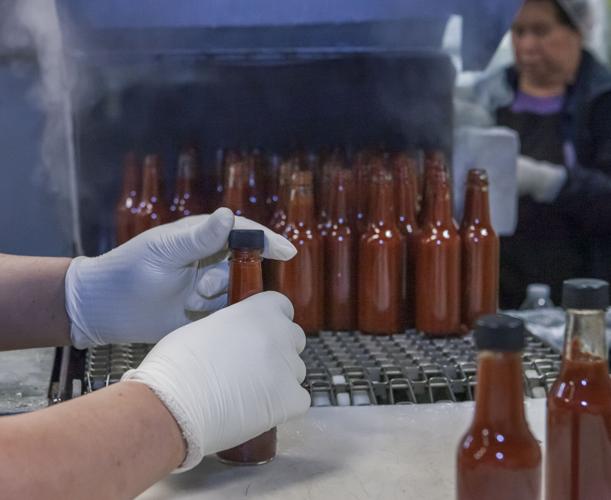 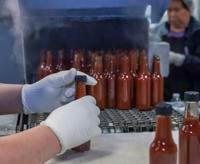 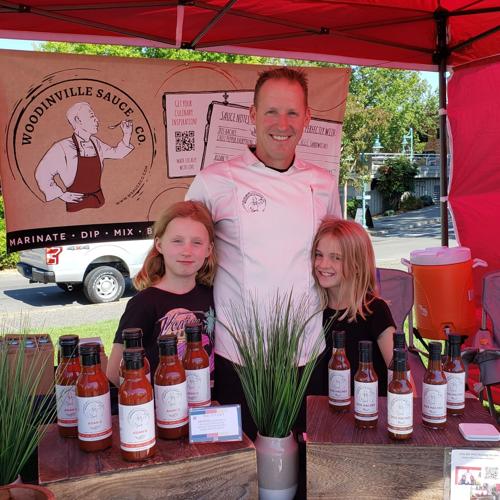 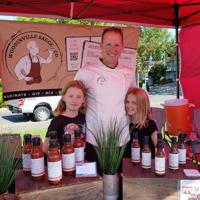 Dave Holthus, with help from his twin daughters, Clara, left, and Adelyn, sells his sauces at a Kirkland Wednesday Market in August.

When Dave Holthus launched Woodinville Sauce Co. in August 2021, he tapped years of experience as a professional chef to create sauces that are uniquely flavorful, made largely with regional ingredients, and branded with a sense of place.

Woodinville Sauce Co. embodies local flavor in more ways than one. Its label features a drawing of a chef tasting his creation and is inspired by Holthus, who wears his chef’s smock whether he’s manning a farmers market booth, offering samples at a store, or mixing ingredients in the facility where his sauces are made, bottled, and labeled. He’s chief flavor creator, ingredient procurer, sauce marketer, and around-the-clock solo entrepreneur.

“It takes a lot to put these sauces together – it’s not corn syrup and barbecue flavoring for $4.99,” said Holthus, aka “Chef Dave.”

His restaurant-grade sauces have caught the eye and tastebuds of numerous retailers, including PCC Community Markets, where he landed in late November.

After just a week there, “some of the stores … have already reordered, which is a good sign,” Holthus said on Dec. 1. He’s in all 16 PCC locations and will be sharing sauce samples and food-pairing suggestions from 11 a.m. to 3 p.m. at PCC Redmond on Dec. 15 and PCC Bellevue on Dec. 16.

Holthus sells the sauces individually or in gift packs of all three. He calls Dos Haches his “signature sauce perfected over months of testing.” The name Dos Haches, which translates to “two H’s” in Spanish, represents the significant support Holthus received from his brother-in-law, Cale Hendricks, in the chili sauce’s early development.

Holthus, who lives in Kirkland just up the hill from Woodinville wine country, produces his sauces at Wolf Pack International Inc., a food co-packer in Gold Bar in Snohomish County. Wolf Pack helps small entrepreneurs and farmers commercially manufacture their products per U.S. Food and Drug Administration and Washington State Department of Agriculture guidelines and regulations.

“The sweet part of the deal is that Wolf Pack facilitates creators like Holthus to participate in the process,” Raniga said.

“It’s been a great partnership; they’re phenomenal,” Holthus said. “That’s why I love this co-packer, because I can be involved.”

Raniga said his company handles production so entrepreneurs can focus on marketing and growing their business.

“We have flexibility that allows them to start small (with small-batch production), and we have the capacity to help them grow,” Raniga said.

Holthus has dialed in his sauce flavors, noting, “The French would say that’s the most important thing.”

Now he can focus on marinating growth.